This is all there is in your phone: we study the materials and elements that are most commonly used to build our devices.

Metal, glass, ceramic, plastic … we can find it Smartphones made from very different materials. In fact, its construction can even be a reason to buy, which means that the design of cell phones has gained an important role in recent years.

However, Do we know what these devices we use every day are really made of? To discover this, several studies are being conducted to understand what they really are the elements that shape our phones.

Silicon, the most commonly used material in the construction of smartphones

According to the latest data from Statista, which was collected after examining the materials most frequently used in smartphones between 2007 and 2017, these are there ten elements Mainly used in the construction of mobile devices. And far from what many might believe: Glass is not one of them.

Of higher to lower amountThe most common materials used in the construction of smartphones are the Aluminum, copper, plastic, cobalt, tungsten, silver, neodymium, gold, indium and palladium. The first three add almost 50 grams to the total weight of the materials ** used to build our phones.

The most common materials used in the construction of smartphones according to Statista.

Above all, it draws attention to itself Lack of a material that has been used for years in building all kinds of electronic equipment like silicon. Mostly because a recent study by the University of Plymouth concluded that this is the most commonly used material in the construction of smartphones. In the video below these lines, you can take a look at the evolution of the study and the methods the researchers use to determine the proportion of elements used. 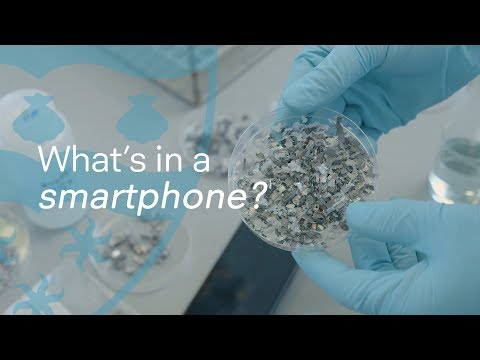 On the other hand, it is worth noting that These proportions correspond to the data collected up to 2017and it is possible that they have changed slightly with the arrival of the in recent years foldable cell phones like Samsung Galaxy Z Fold 2. Furthermore, everything suggests that we might see unconventional materials like wood in the not too distant future.

What is each material used for?

Now you know What is your cell phone made of?. But what are the individual materials used for? In most cases, each material can be used multiple times within the devices. However, it is possible Assign each element to one or more specific uses. Your cell phone is made of a lot more materials than you imagine.

These are just some of the materials and components found in your terminal. Obviously There are many more which are used for extremely concrete things in tiny proportions. As you can see, this is your cell phone is “made of glass” or “made of plastic” it is little more than half a truth.