We compare the Samsung Galaxy S21 with the iPhone 12 Pro, which phone is better?

Just a few days ago, Samsung, currently the most important brand in the Android scene, presented its new line of high-end terminals. The Galaxy S21. The South Korean company follows the line of its predecessors and takes hardly any risks. It wants to maintain the good results of 2020 in this year 2021 as well.

The Samsung Galaxy S21 is the first high-end smartphone to be introduced this year. Although the specs are the best we can find, The truth is that it won’t be easy for him to win the competition, especially against one of the most popular phones of the past year.

Samsung Galaxy S21 or iPhone 12 Pro? Which one is better?

Because on the other side of the ring is one of its main competitors Apple iPhone 12 Pro, one of the best terminals of 2020, and to this day it remains a safe choice for those looking for a powerful and well-balanced smartphone. South Korea versus Americans, Android versus iOS, which phone is better? This is the screen of the Samsung Galaxy S21

Both the Samsung Galaxy S21 and the iPhone 12 Pro They aren’t too big for high-end phones, something we sincerely appreciate. While the dimensions of the Samsung terminal are 151.7 x 71.2 x 7.9 mm, the iPhone is 146.7 x 71.5 x 7.4 mm. They differ in weight, as the Galaxy weighs 169 grams compared to the iPhone’s 189 grams, although of course everything has an explanation.

Because the Samsung Galaxy S21, although it is a high-end and costs more than 800 euros, has a plastic back as was the case with other models from the company last year, such as the Note20. Obviously, it’s not the same plastic that we find in terminals from 200 euros, but it’s still plastic.

On the contrary, Apple’s iPhone 12 Pro continues to use glass, which is obviously less resistant to drops and shocks. but a lot more premium when you pick it up. A matter of taste.

Cameras: You will enjoy taking pictures If you’ve thought of finding significant changes to the Samsung Galaxy S21’s camera compared to the S20, I’m sorry to have to disappoint you. Samsung has followed the “if something works, don’t touch it” philosophy so we don’t find many surprises. A 12-megapixel main camera, a 12-megapixel ultra-wide camera and a 64-megapixel sensor that acts as a telephoto lens.

On the other hand, the iPhone 12 Pro has a triple 12 megapixel camera (wide + ultra-wide + telephoto) with 2.5 optical zoom. This greatly improves the photographic range of the regular iPhone 12.

Since the two models cannot be compared in detail and the iPhone 12 already outperforms the Samsung Galaxy S21, We can conclude that the iPhone 12 Pro has a better photographic range Thanks to more natural and consistent image processing in most scenes, iPhone is the best phone if you use Instagram a lot.

However, Both terminals take excellent pictures Regardless of which phone you hold, you will undoubtedly enjoy both cameras. If we look at the numbers, we can see that the Samsung Galaxy S21 wins through a landslide. Better battery and better fast charging. However, Numbers aren’t everything.

Apple has managed to make its terminals consume less than Android phones. That’s why they don’t need as much battery to reach the end of the day. The autonomy of both terminals is pretty similar despite the numbers (4,000> 2,815) So we won’t have a problem with any of the terminals.

What could we have asked for a little more battery from Samsung in its Galaxy S21? Well, for the price and the rest of its specs, it wouldn’t have been bad at all.

Processor: Everything stays at home

The same controversies arise with every new high-end model Samsung launches. While Samsung relies on Qualcomm and its Snapdragon in some countries like the US or South Korea, in the rest of the world we have to be content with the Exynos 2100, some processors from the brand itself, but whose performance is more than remarkable It is a far cry from the results of Qualcomm’s “top” processors.

Apple is also equipping its iPhones with homemade processors. In this case, the iPhone 12 Pro mounts an A14 Bionic chip and for many It’s the best processor out there in terms of both power and performance..

Conclusion? Both terminals are a beast in terms of performance and to be honest, the difference is barely noticeable in daily use. Either of them can run any application or game and without them we won’t notice any slowdown.

The difference between the two terminals, as we’ll see now, isn’t so much in the type of processor it mounts (let’s face it, something shows up too) but in the operating system. Android and iOS.

Operating system: is Android much better than iOS? Or the other way around? The iPhone 12 Pro in blue is really beautiful

The usual battle. Is Android Better Than iOS? It depends on.

Be that as it may, both operating systems are almost the same in practice. So the two have practically the same apps, services, and tools The choice between one or the other depends only on personal taste.

It all depends on whether you prefer to join the Apple ecosystem and achieve excellent integration between devices or, on the contrary, prefer the – less and less – freedom that Android offers its users. Whatever you choose, you will get it right.

Samsung Galaxy S21 or iPhone 12 Pro, which is better? 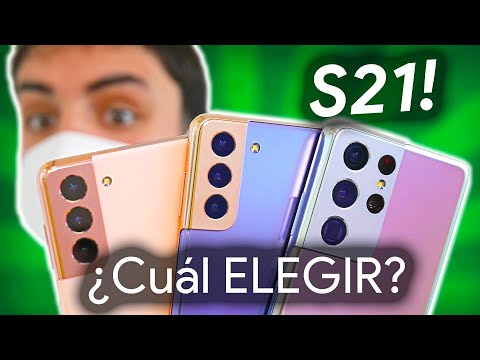 You’re not really thinking of deciding between the Samsung Galaxy S21 or the iPhone 12 Pro. but between Android and iOS. Both terminals are two of the best options to choose from, and that means both are two very good high-end smartphones, both in terms of performance, design, and camera.

If we had to choose between the two We would certainly go for the iPhone 12 ProNot only because we like the performance of the A14 Bionic better than Samsung’s Exynos, but also because it has a slightly higher photo quality.

Despite everything, you need to take into account that the main difference between the two smartphones is the operating system and you need to first evaluate the positives and negatives of each smartphone. Yes, No phone will let you down.